St Bartholomew's Church Wednesbury
Our church building is a very large and fine medieval church enlarged and developed by the Victorians.  It is a Grade 2 listed building first mentioned in 1088.  It has a superb collection of William Kempe stained glass windows and plenty of original medieval furnishings.  Sitting on the top of Church Hill, seen for miles around, St Bart's has been at the heart of Wednesbury for centuries.

There was certainly a church at Wednesbury by the early thirteenth century because it is recorded in the Plea Rolls of King John for 1210-1211, that Master William, a royal chaplain had been appointed to the church at Wednesbury. The present St Bartholomew’s Church dates from the late 15th or early 16th century and contains a pulpit carrying the date 1611.  At the west end of the nave is a table tomb with recumbent effigies of Richard Parkes who died in 1618 and his wife.  It has been greatly restored and rebuilt and stands on the site of an earlier 13th century stone built church.  Remains of the earlier church were found during restoration work in 1885 and consisted of a three light window contained in a round-headed arch.  The three lights date back to the 13th century but the arch itself could be earlier. The ancient window is to be found at the west end of the north aisle.  It is next to the doorway which gives access to what was the choir vestry. This has a pointed segmental arch and is said to be from the same date as the window.  In 1757 the tower was restored and the top 16 feet were rebuilt. At the same time the ball and weathercock were replaced.  Restoration work continued in 1764 and 1765 when the nave roof was repaired and a ceiling added to the nave.  Unfortunately, during the work part of the parapet on the northern side collapsed onto the roof and both fell onto the pews beneath, causing serious damage.  As luck would have it the pews were empty at the time.  Only an hour earlier they had been occupied during a funeral service.

As the parapet on the south side was found to be in an extremely poor condition, the decision was taken to rebuild both parapets and also to add a ceiling above the north aisle.  As the restoration was now much larger and more expensive than previously envisaged, neighbouring parishes were invited to make collections towards the cost of the work.  In 1775 part of the south transept was enclosed and a wall added to form a vestry and in 1818 the body of the church was coated with Parker’s cement.  Nine years later the church was enlarged by the addition of the north transept and an extended nave.  The pews were also replaced and a new font was presented by the Rev Isaac Clarkson in 1827.  Restoration work continued in 1855 when the upper part of the spire was completely rebuilt and the 8 bells were recast.  Two new bells were also added, along with a new clock and weathercock.  The cost of the repairs was raised by subscription and amounted to nearly £1,200.  In 1878 the spire was raised by 10 feet, in 1885 the internal galleries were removed and the floor lowered to its original level.  Further restoration work took place in 1902 and 1903 when the transepts were restored.  In 1913 the Chapel of Ascension was added to the south transept. 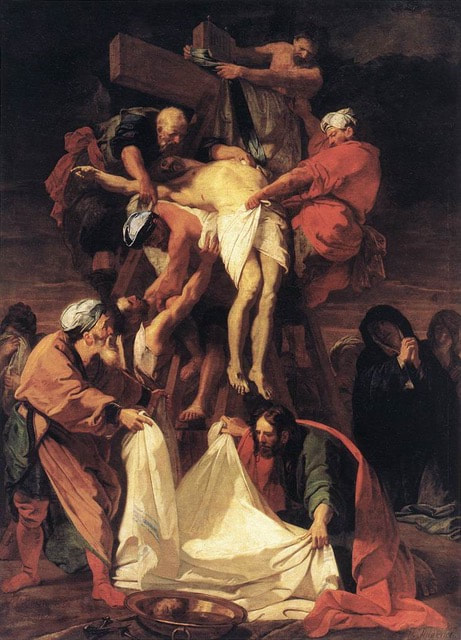 This is a photo of a painting we have in Church above the font looking towards the altar. It depicts Christ’s descent from the cross. It ought to have been included the previous weekend but I posted a number of photos on Easter Sunday so I have left this one until now.
This was painted by Jean-Baptiste Jouvenet (1 May 1644 – 5 April 1717) - a French painter, especially of religious subjects. He was born into an artistic family in Rouen. His first training in art was from his father, Laurent Jouvenet; a generation earlier, his grandfather, Noel Jouvenet, may have taught Nicolas Poussin.
Jouvenet, early on, showed remarkable aptitude for his profession and on arriving in Paris he attracted the attention of Le Brun, by whom he was employed at Versailles, notably in the Salon de Mars (1671–74) under whose auspices, in 1675, he became a member of the Académie Royale, where he was elected professor in 1681, one of the four perpetual rectors in 1707. He also worked under Charles de La Fosse in the Invalides and Trianon.
Anthony Blunt found in Jouvenet's manner reminiscences of Poussin, Le Sueur and the late work of Raphael, but with a characteristic Baroque emotionalism. The naturalism of Jouvenet's style sets his work apart from most of the religious painting of his time.
Jouvenet died on 5 April 1717. Having been forced by paralysis during the last four years of his life he had to work with his left hand.
The painting was commissioned about 1698.