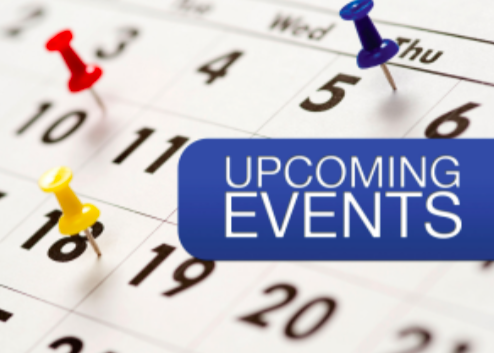 ​We have been asked by Veena and Alison from Sandwell's Neighbourhood Partnerships, if we can publicise events. You may need to click on the photo to see the full details. 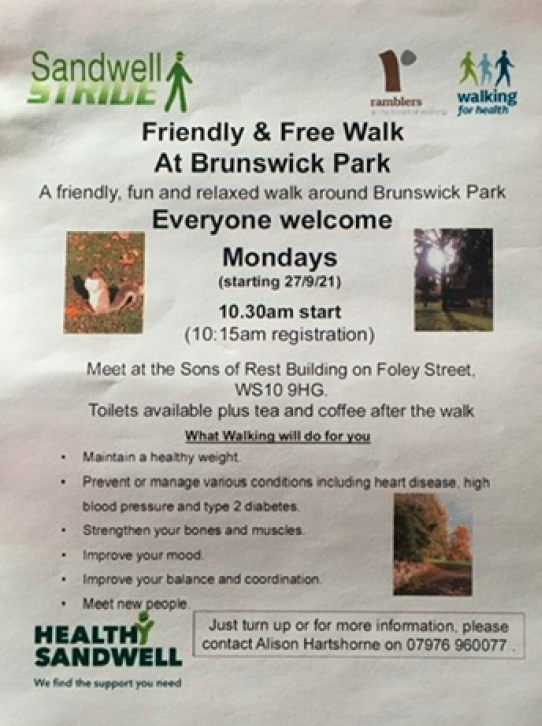 The new President of the Ahmadiyya Muslim Women’s Walsall Branch, Bushra Naureen, invited ladies from our church to an Interfaith Coffee Morning on Tuesday 16th November at the Lighthouse Bethel Christian Centre in Walsall, celebrating Interfaith Harmony Week.
Marg Wood, Claire and Lynn Yardley and I (Wendy Bird) joined our Muslim friends and other ladies at the centre. It was so nice to meet up again and see some inspirational women we hadn’t seen for a while, including Shaz, the Black Country Near Neighbours Co-ordinator at Transforming Communities Together; Rani Gundhu QPM (Queens Police Honours list) who is involved with Equality, Diversity and Inclusion for West Midlands Police; and Ritu Sharma who is a No 1 best-selling author, a broadcaster and a Women’s Empowerment Embassador.
As usual at these events, we were well fed! Marg and Claire had some mehndi done on their hands, too. We look forward to the next event.
​
PASSION SUNDAY (FIFTH SUNDAY IN LENT)

An Easter Pageant started by a pandemic in 1633 was cancelled in 2020 by another pandemic, this time COVID-19.

Today is the Sunday between Mothering Sunday and Palm Sunday.  For us, as Holy Week approaches, the atmosphere of the season darkens; the readings begin to anticipate the story of Christ’s suffering and death and the reading of the Passion Narrative is what gave today its name of ‘Passion Sunday’ marking the beginning of the two-week period called Passiontide.

So, today is an important day in the Christian calendar.

Nearly 400 years ago the history of the Passion Play began. The bubonic plague was spreading death across Europe. (Sounds familiar!) It killed at least one member of every family in a small Bavarian Alpine town called Oberammergau (which lies 45 miles south of Munich near the Alpine ski resort of Garmisch-Partenkirchen). The distraught villagers made a vow to God to perform a Passion play every tenth year, depicting the death and resurrection of Christ, if their lives could be spared so, in 1634, the first Passion Play took place. (You have to be an Oberammergau resident for 20 years to participate.) The promise had been kept until last year when the Passion Play had to be postponed for two years due to the coronavirus pandemic. More than 2,000 of Germany’s 15,320 confirmed cases of coronavirus were in Bavaria, as were 13 of the country’s 44 deaths from COVID-19.

Incidentally, before you might tell me, I know the play has been cancelled on a few occasions in the past, such as the during the two World Wars.

The organisers have said, “The Passion Play goes back to a vow from 1633.  Oberammergauers will continue fulfilling this vow.” (The 42nd Oberammergau Passion Play will now take place from 14th May to 2nd October 2022.)

Some of you may have been fortunate to have seen this Passion Play.
​
ROYAL VISIT TO WEDNESBURY  1962
(Sunday 8th March 2020)

A big thank you to Ian Bott, Wednesbury’s local historian, who gave a very interesting slide-illustrated talk this evening about the Royal visit to Wednesbury of Queen Elizabeth II on 24th May, 1962. The talk encompassed the last glory days of Wednesbury Borough (only 4 years later, in 1966, it became absorbed into the name of West Bromwich for a time and later as part of Sandwell).
People were welcomed into church by the Bell Ringers, led by Tower Captain Gordon Birk (just as the bellringers welcomed HM Queen Elizabeth to Wednesbury in 1962).  Many people commented on how nice it was to hear the bells as they were arriving.  Thank you Gordon and the team.
Before the talk, Mario entertained those people who arrived early. There was a display of rare Wednesbury civic memorabilia which people could view prior to the talk.
During the interval refreshments were served and people had another chance to view the displays.  After Ian’s second half of the talk, Mario and Trevor entertained us with some songs before finishing off with the National Anthem.
Thank you to everybody who bought entrance tickets and raffle tickets.  Thank you for the kind donation made prior to the event starting.  Rather than mention everybody by name and risk omitting somebody, instead we would like to say a special ‘Thank you’ to the ladies who supplied and served the refreshments during the interval; the ladies who sold raffle tickets; the lady who created the advertising posters and tickets and promoted the event on Facebook and the website and to Rob for organising the event. Thank you to Mario and Trevor for entertaining us. Most of all, thank you to Ian Bott who gave his services free this evening - a generous offer indeed.  We are very grateful to him.
We were really pleased to be able to host a ‘meet and greet’ visit to our church a couple of years ago to Khansa and 4 other ladies from the Ahmadiyya Muslim Women’s Association, Baitul Muqeet Mosque, Walsall. Thank you to Lynn Castillo, Mandy Horton, Linda Russell, Linda Stockall, Sue Stokes, Joyce Turner, Claire Yardley, Lynn Yardley and me (Wendy Bird) for representing our church. It was a great opportunity for us to show the ladies from the Ahmadiyya Muslim Women’s Association our beautiful church.

The ladies’ community stands for education, integration and inter faith peace. They are also committed to helping others, engaging local communities and working for the common good. The principle to which they adhere is that they have kindness at heart for the whole of mankind. Islam teaches them to always be mindful towards God, who is their Creator and to always keep His memory fresh in their hearts and to deal with His creation with love, affection, harmony and tolerance; something in which we believe, also.

We showed them around our church pointing out specific things of interest and tried to answer their questions regarding our church history. We then had refreshments and a chat. It was a wonderful couple of hours of fellowship.

Thank you to Father Mark for providing some delicious samosas, pakora and other delights as well as a box of Indian sweets which we presented to the ladies as a gift.
Thank you to Linda R and Linda S for baking delicious vegetarian cakes: a Lemon Drizzle cake and Victorian Sponge cake (with home-made jam).
Thank you to Sue for taking some of the photos to add to mine. (Amazingly, we managed to get one photo with Joyce on it!)
Finally, a big thank you to the ladies for their generous gift.

We look forward to the next event.
​------------------------------------------------
PREVIOUS VOICES ENTWINED CONCERT
What an amazing choir Voices Entwined is, led by Louise Blackburn who is so enthusiastic about the music they perform and conducts her choir with such energy. It was a joy to watch and to listen to. We were treated to a great early Christmas programme. Some songs were familiar but many not so familiar. The harmonies of the singers sounded wonderful. Thank you so much for performing this evening to help us raise much needed funds. Thank you, also, to Mario Castillo who entertained us during the interval. Mario is a member of the choir but also sings for us in services and plays his guitar. We are truly blessed to have him.
Their website is: https://www.voicesentwined.co.uk and you can follow them on Facebook - https://www.facebook.com/voicesentwined?ref=hl and Twitter.
​Sedgley Ukulele Strummers: 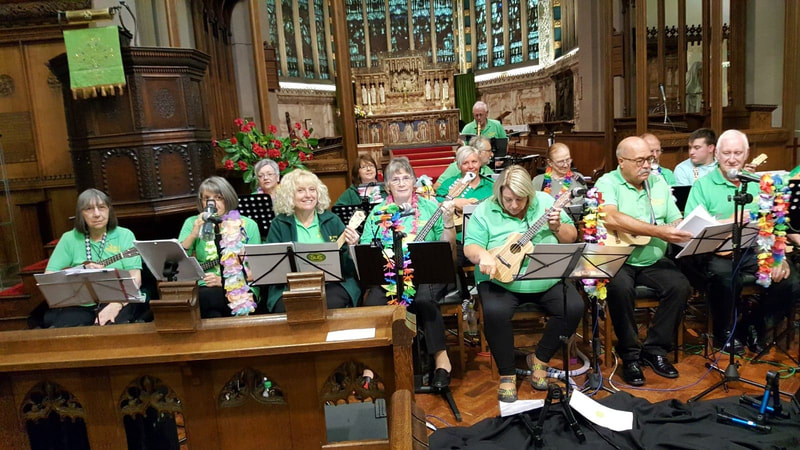 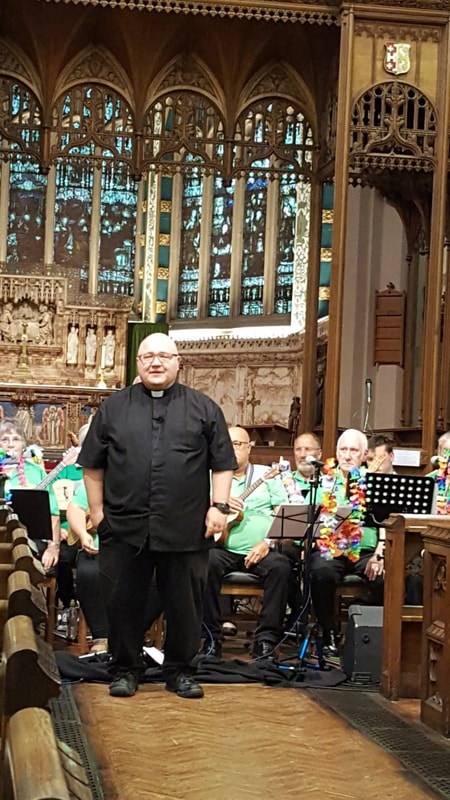 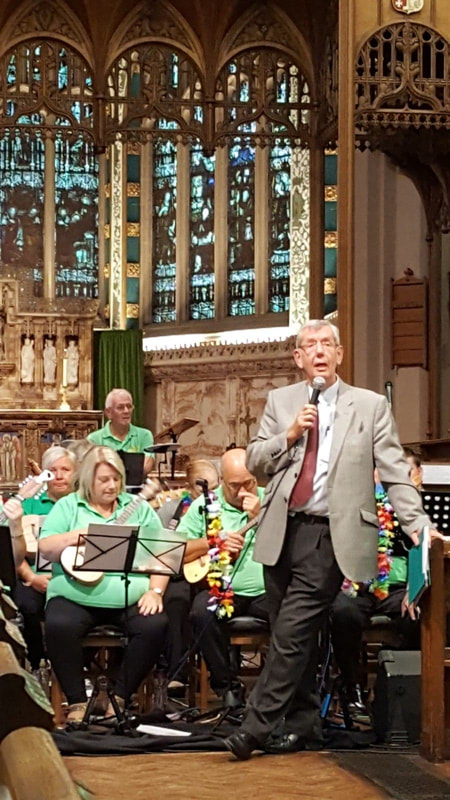 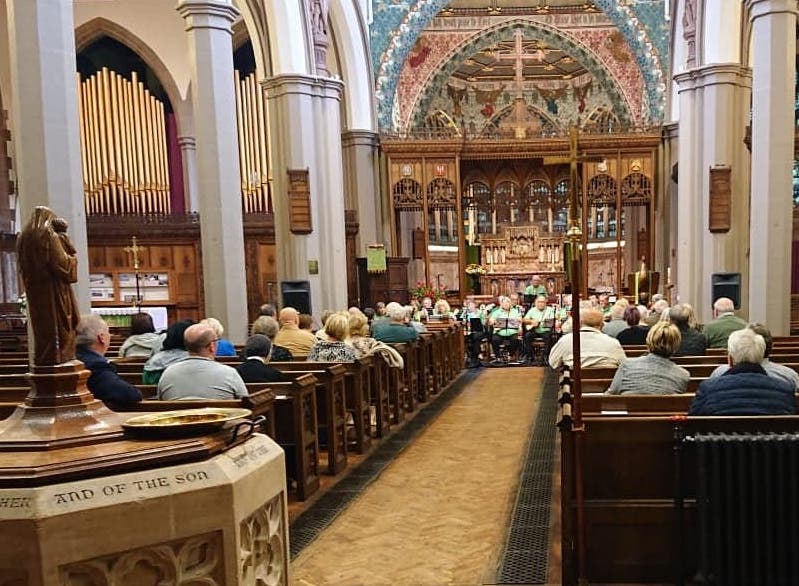 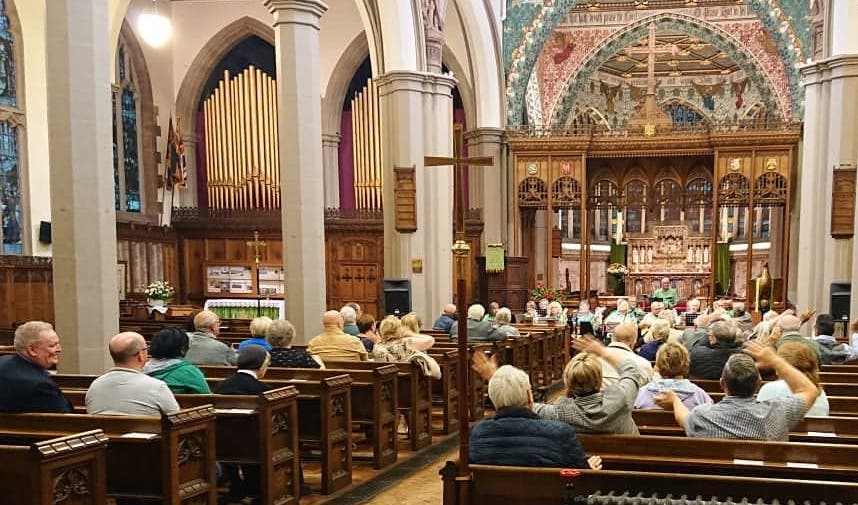 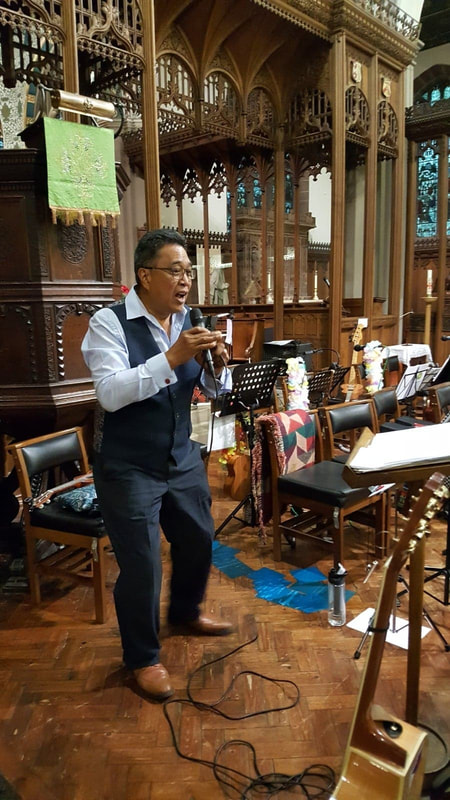 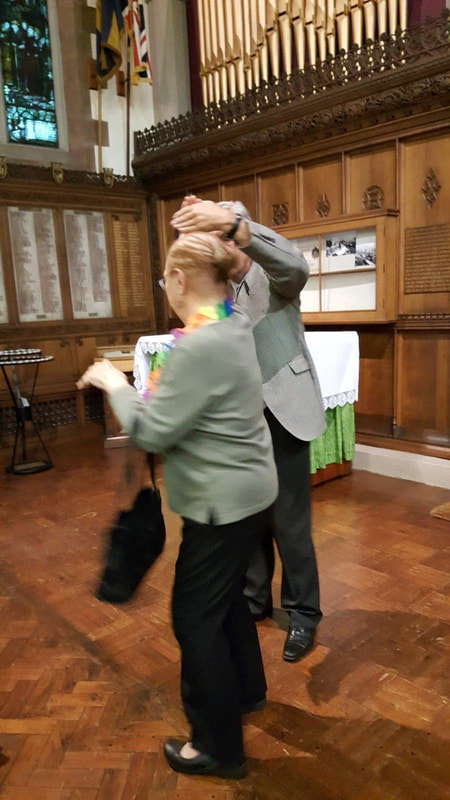 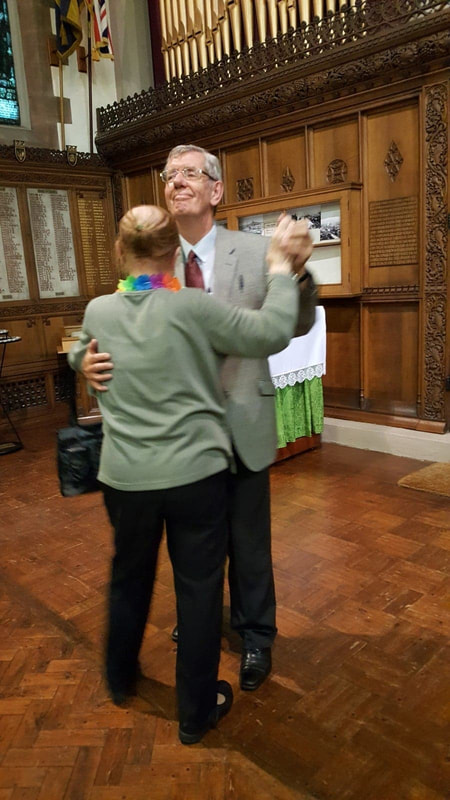 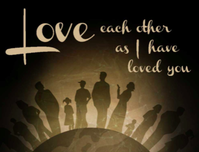 ​Father Mark’s sermon on 19th May 2019 was wonderful (they usually are).  It was based on ‘Love one another’ as in the Gospel reading (John 13:31-35), particularly the following words:
“I give you a new commandment, that you love one another.  Just as I have loved you, you also should love one another.  By this everyone will know that you are my disciples, if you have love for one another.”
​
There are many passages in the Bible where love is mentioned.  A favourite of mine is:
And now these three remain: faith, hope and love.  But the greatest of these is love. (1 Corinthians 13:13)
Here are a few other passages where love for one another is mentioned:
​On Tuesday, 7th May 2019, we hosted the Archdeacon’s Visitation.  This service is the official admittance of Churchwardens as office holders of the Diocesan Bishop. During the service The Venerable Dr Susan Weller, Archdeacon of Walsall, delivered a sermon called the ‘Archdeacon’s Charge’, the aim of which is to offer advice, encouragement and support to parishes in general and Churchwardens in particular.

We were pleased to welcome Churchwardens and other congregation members from the following churches: AND, of course, our very own church when our Churchwardens Trevor Stokes and Marilyn Norton were sworn in to their role and office.

Visitors from elsewhere in the Archdeaconry were present, also.

The Churchwardens are Officers of the Bishop and they discharge their duties as are, by Law and Custom, assigned to them.

Well done to all of the Churchwardens.  We wish you well in your roles. 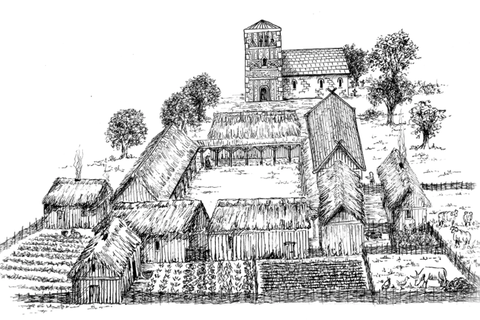 David Brookes, Musical Director of Brewood Singers is, also, the Choirmaster and Organist at Polesworth Abbey. He has extended an invitation to us to visit the Abbey if we are in the Tamworth/Polesworth area where we will receive a warm welcome.  The Abbey is open to visitors from 11 am to 3 pm each day except Mondays.  (You may also get a cup of tea or coffee!)

The Abbey Church of St Editha is in Polesworth which is a large village in North Warwickshire near Tamworth.  The Abbey was founded in the 9th century by St Modwena and King Egbert. The first abbess was Edgytha (daughter of King Egbert) now known as St Editha; the present church is named after her.​

For further information have a look at the Abbey’s website.
https://www.polesworthabbey.co.uk