DO YOU HAVE PRIMARY SCHOOL AGE CHILDREN?
DO YOU WANT TO JOIN US?
Are you interested in joining our team to help them take dramatised Bible stories out to local schools?   Don’t worry if you prefer not to have a speaking part in the stories. Sometimes we just need extra people to form a small crowd, religious leaders, soldiers, part of a procession, etc. You don’t need to be a member of the church congregation (although you will always be welcome to join us at a service). You will, of course, need to have a DBS check done because of working with children but don’t let that put you off contacting us. Please let us know if you’re interested in joining the group or if you want further information (use Messenger and send Wendy a message m.me/StBartsWednesbury).   In church is a board, created by Marg, that explains what we do.  Please also see news and images below. 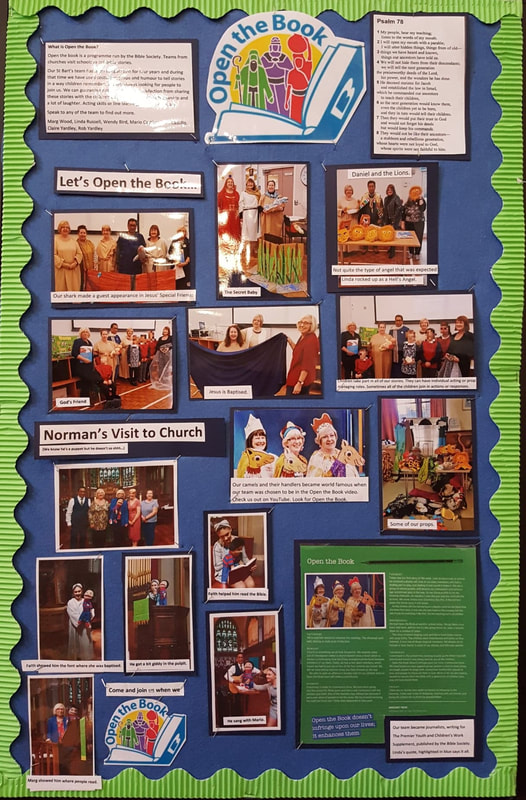 We are a small team of volunteers who deliver dramatised stories from the Bible to children in school.  Over the last 2 years we have gone into several schools in Wednesbury but, as our larger team of volunteers lost members as a result of  jobs, illness etc, we have had to reduce the number of schools we visit to make it more manageable.  One of our regular schools is St John's C of E Primary Academy and another is Old Park Primary School.  We are always made very welcome and value the relationship we have built up over time.  In addition, Marg has gone into a nursery to read short simplified Bible stories to the children.

We have a lot of fun at our rehearsals, with lots of laughter.  We value the support we give to each other, too.   It is a rewarding experience for all of us.  If anybody is interested in joining us please contact the church via the Contact page.   If you complete the  form then it will be delivered to Father Mark who will pass on your message.  Or, send a message on Facebook and Wendy will get back to you.   You can also contact Wendy via Messenger (m.me/StBartsWednesbury).

Our Open the Book team continues to take dramatised Bible stories into some local primary schools.  Currently they visit St John’s Church of England Primary Academy and Old Park Primary School. We were pleased to welcome Holyhead Primary Academy to Church for their Christmas service in December, too.

We were one of the Open the Book teams chosen to be filmed in 2017 at St John's C of E Primary Academy. Only about 4 or 5 schools in the country were chosen so it was a real honour to represent this area. Some of the children from our school are featured in the film too. One of them (the young blonde headed lad) was so sweet when he spoke about the Bible. We (and our famous camels, of course) are still featured on promotional posters at training sessions.  (See more details and a link to the video on YouTube lower down the page.)

CHARITY FOCUS FOR 2020
We have chosen to raise funds for Barnardo's, the children's charity.  We hope you will be able to support us in this.
CHARITY FOCUS FOR 2019
As a group we supported the charity Pens for Kids.  You can use this link: https://www.pensforkids.co.uk​ to find out about their work.  Also, they have a Facebook page (check the ‘About’ tab first):
https://www.facebook.com/pg/PensForKidsUK/about/?ref=page_internal
We were pleased to send a number of parcels comprising pens, pencils, felt tip pens, rulers, erasers, crayons etc)  to:
(1) Justin Afoni Njobam, President/CEO, ACOHOF (Afoni Children of Hope Foundation), c/o Catholic Mission Tatum Bui Division , North West Region Republic of Cameroon, Central Africa
(2) Mr Kwasi Yeboah, Prince of Peace Community Schools, c/o PO Box Nk966, Nkawkaw Kwahu
Eastern Region, Ghana, West Africa
(3) Rescue Children Sierra Leone, Richard F Marah, Executive Director, 32c Cocklebay off Aberdeen Road, Freetown, Sierra Leone, West Africa
(4) Ms Alice Chinzengo, Executive Director, Urim and Thummim Child Care Trust, PO Box 2392, Lilongwe
Malawi, South Eastern Africa (a large parcel was sent to this centre)
Thank you to everybody who donated so generously.  We hope that more children will not be deprived of the basic materials needed to have an education.

----------
​
​On Sunday 1st February 2020 our team performed 'The Boy in the Temple' during the All Age service in church. Below is a slide show of some photos taken by Sally Law.  Thanks Sally. 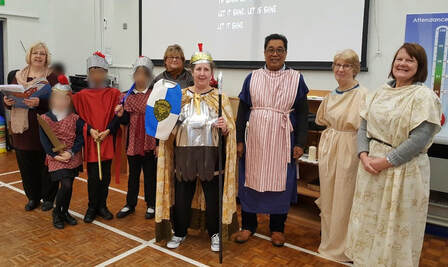 On 15th January 2020 our Open the Book team visited St John’s C of E Primary Academy and told the story of the ‘The Centurion’s Servant’. This story is about a Centurion in Capernaum who was used to giving orders and those orders being obeyed. When he received news that his servant was very ill he went to see Jesus. The centurion felt he did not deserve to have Jesus visit his home and said that Jesus only had to give the order and he knew that his servant would be healed. The Centurion believed in Jesus’ power. Jesus was pleased with the Centurion’s trust in him. Regardless of the fact that the Centurion and his soldiers had bullied and stolen from the people of Capernaum, Jesus said they should love everyone, even their enemies. And, of course, he healed the servant. This is a lesson for us today, too.
Linda led the team and also played the part of Jesus. Wendy narrated the story whilst Claire was the Centurion and Mario, Lynn and Mandy, with some of the children, were soldiers. 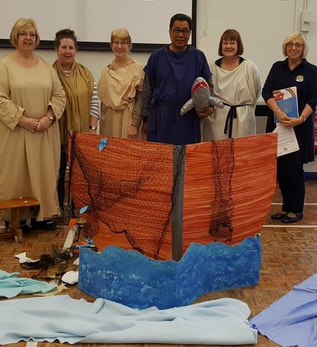 ​​On 26th March our Open the Book team visited St John’s C of E Primary Academy to tell the story of Jesus’ Special Friends.  Marg narrated the story, Linda played Jesus and Mario was Peter, the fisherman.  Jesus asked Peter to take him away from the shore in his boat so he could speak to the crowd that had gathered.  After he had spoken he asked Peter to take the boat farther out and to drop the nets but Peter was surprised as he had not caught any fish the previous evening and was certain he wouldn’t catch anything but he did as Jesus asked. Suddenly the nets were bulging with so many fish he couldn’t pull them aboard and shouted for help from his friends. Lynn, Claire and Wendy played the fishermen and they sailed out to help Peter.  They did a cracking job rowing their boats and in no time at all they helped Peter pull in the catch.  There were so many fish that they were jumping all over the boat. There was even a shark! Some young children from the nursery on the front row threw fish and did a fantastic job, as did Lynn, Claire and Wendy. The story ended with Jesus asking all the fishermen to follow him.​ 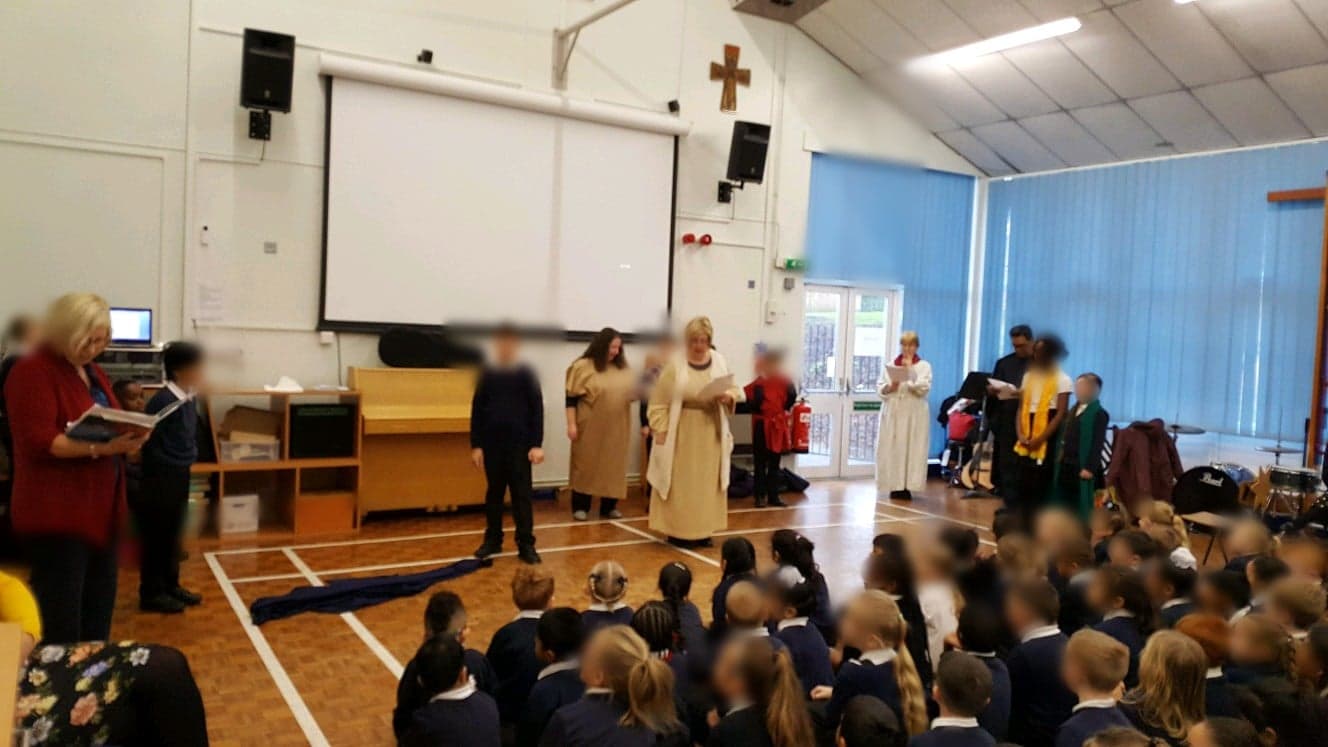 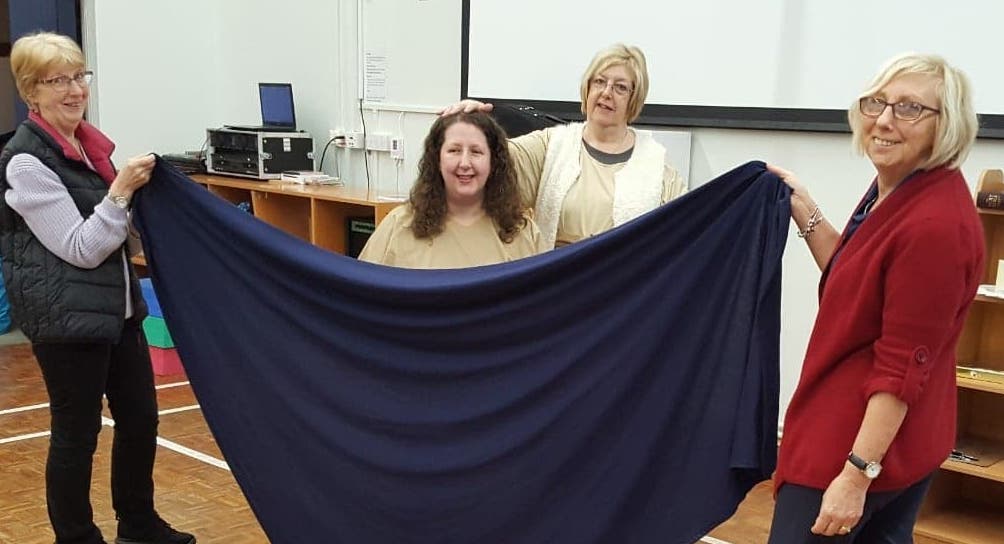 On 12th March  our Open the Book team told the story of when Jesus was baptised by John the Baptist (photos above).  Marg did her usual great job as the narrator; Lynn was Jesus (and she prepared the script, also); Mario was a religious leader with a couple of the pupils; Claire was a member of the crowd with 3 of the pupils and Wendy took on the role of John.  As John, Wendy had to wear a camel coat that was very itchy and she had to eat a locust.  Yuk!  (Well - the children thought she had eaten it but, in fact, it was just a few Quavers, which was just as well as she is a vegetarian!)
John baptised the members of the crowd and, finally, baptised Jesus.
Mario sang beautifully the song ‘Ten Thousand Reasons’ which was a lovely end to the story.

In December 2018 we performed 'The New Noisy Neighbour' during the Christingle service and the Crib service.  Some of the children took on some roles and did a great job.
​Bible Society filming
During the summer of 2017 we were privileged to be chosen to be filmed by the Bible Society.  As a result of this we are featured in a training video and training materials, banners and the Open the Book newsletter.   More recently we were approached by Premier Christian magazine who wanted to included the team's activities in their 'Diary of a Church' article.  Here is a link to the YouTube film.
​Here are some Tweets from the Bible Society Twitter account about Open the Book.  They feature images and what we said during the filming we did with them and a quote from one of the pupils.
​When the Church had a Christmas Tree festival in 2015, Marg suggested we make our own decorations for the Open the Book's tree.   Here are some of them:
Meet members of the team, past and present, including Norman our puppet.
​We always have fun when delivering the stories.  This is a collection of some of them: 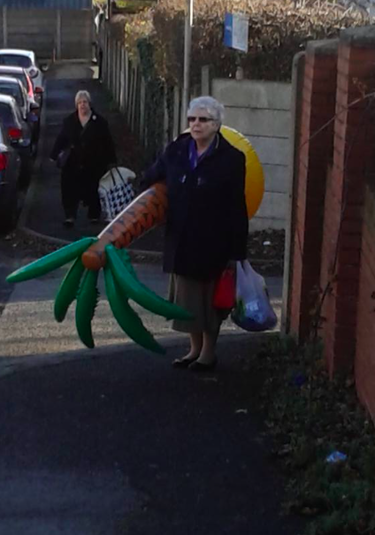 ​This is not something you see every day!  The residents by the school must now be used to us arriving with all sorts of props.
TRAINING AT HOLY TRINITY CHURCH, OLD HILL
On Saturday 29th September, Claire and Wendy represented our Open the Book team at Holy Trinity Church in Old Hill.   Alan Darby invited us to join their training morning some weeks previously and asked if we could share ideas and take some props with us.   We were given a lovely welcome from Lynn Satchell (Regional Training and Development Officer for the West Midlands), Alan Darby, his wife Dianne and the other members of their teams and visitors.  We took a variety of clothes, backdrops and props.  Everybody appeared to be impressed by them and were pleased to see that it doesn't always require a lot of difficult work to produce them. They loved our camels (of course - we  wouldn't expect anything else from our stars!) and they were very well behaved, professional as always.  The attendees were impressed by the simple tabard design used in a variety of materials to produce simple and effective costumes. They liked our rain maker and storm tube and took photos, saying they were going to purchase them.  To be honest, they seemed to like all of our props.
It was great to see that Open the Book are still using the training backdrops and video in which we are featured.   (See the photos below that I took from the video shown during the morning.)
We enjoyed some delicious refreshments; thank you to Dianne Darby and the rest of the team. 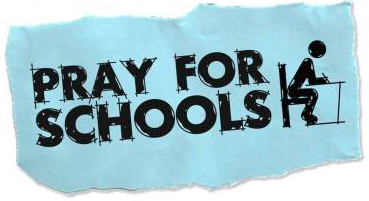